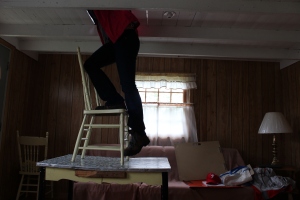 Andrea climbing into the attic of a mid-19th century house.

Today marked both the beginning of our second week here in Witless Bay and the much anticipated arrival of Ed Chappell, Director of Architectural and Archaeological Research in Colonial Williamsburg. He started out the day with a presentation on various houses throughout the historical Virginia site, introducing us to architectural terms that will help us along as we begin our vernacular architecture week. We looked at images of these houses, keeping an eye out for any scars, moldings, or parts that had been added or removed as a way to distinguish the original parts of the house from later additions. We also looked at architectural structures and what their design may tell us about the people who lived in them. We didn’t know it at the time, but these practices would help us later in the day when we accompanied Ed Chappell to a Witless Bay house to construct a floor plan.

What surprised me the most while discussing colonial architecture in our morning lecture was that Ed Chappell brought up a historical site from the town I grew up in, Marblehead Massachusetts. Marblehead was founded in the early 1600’s as a small fishing port, and many of the original houses built there still stand, including the house I was raised in. While I was aware of the history of my little home town, I never imaged that I would find myself in a vernacular architecture class in the chapel of the Nagle House Convent in Witless Bay and hear our academic guest for the week mention the Jeremiah Lee Mansion, a preserved historical home that is right up the street from my childhood home. Something Jerry pointed out later in the day about Newfoundland architecture versus New England architecture struck me and made me think about my relationship to my home town as well as to Newfoundland, the place I now call home. Jerry told us that these historical houses in Colonial Williamsburg and New England, unlike so many houses in Newfoundland, were built to last as long as possible and were by no means considered temporary homes. Even though Newfoundland has a history older than that of colonial America, many homes were built as more temporary spaces. This is something I hadn’t realized before moving to Newfoundland this past month. I knew about the province’s rich history, but I didn’t know that many houses built before the 1850’s no longer stand. It is strange to think of the history of a place without physical representations of it such as original structures of houses. When one visits a town like Marblehead there is such a wealth of information that can be acquired through merely walking downtown and immersing oneself in the colonial architecture. I realized today that in the past I have taken this quality for granted. Just because a place has a longstanding history does not mean that it has a full physical representation of its past. We have to look for clues (as we did today with Ed Chappell) to enhance our understanding of Newfoundland’s history. 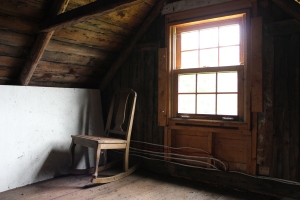 An interior shot of the attic. 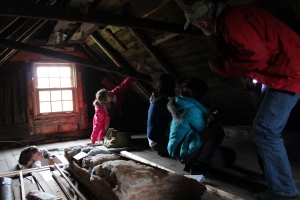